An unusual feature of the medical world is that it contains a vast language of eponyms.  An “eponym” is any term derived from a person’s name.  The “Dewey decimal system,” for example, is named for librarian Melvil Dewey.  Billings, Montana is named after the railroad baron Frederick Billings.  The word “eponym” itself stems from the Greek epṓnymos, meaning “giving name.”

For doctors, the human body contains thousands of eponyms, honoring scientists of generations past.  The first one I learned was “the angle of Louis.”  This was in the anatomy lab, the commencement of medical training and a rite of passage for students.  The first step in dissection was to make a scalpel incision through the skin of the central chest.  As a landmark for initiating the cut, the anatomy textbook advised locating “the angle of Louis.”  Palpating the upper chest wall one finds a small change in contour, where the bone and cartilage shift from projecting slightly outward to falling slightly inward.  Gamely, my anatomy partners and I pressed our fingers into the cadaver’s doughy, obese flesh.  With pressure and a side-to-side rocking motion, we found. . . a tiny bony ridge.  It seemed an inauspicious spot, and I wondered how Louis determined to plant his flag here.  Yet who was I to judge?  I pressed the scalpel to its task.

The Angle of Louis.

We quickly discovered that human anatomy is a vast storehouse of eponyms.  “McBurney’s point” was another early favorite.  The name brings to mind an Irish pub or swimming hole.  In fact, this is the spot lying two-thirds of the distance from the belly button (“umbilicus” for the professionals) to the tip of the right pelvis.  This marks the approximate location of the appendix.  Pain at McBurney’s point is an important warning of appendicitis.

Another memorable eponym was “Virchow’s node,” a lymph gland located above the left clavicle.  When swollen, Virchow’s node is a marker of metastatic abdominal cancer.  Even today, this disease is rapidly fatal.  Given its dismal implications, Virchow’s node was also once called “the seat of the devil.”

A daily flow of eponyms ensued, for body parts both major and obscure: the circle of Willis (the primary arterial system in the brain), the Edinger-Westphal nucleus (a nerve-center that controls constriction of the pupils), the bundle of His (specialized heart cells that conduct electrical impulses), the sinus of Valsalva (a recess in the wall of the aorta).

The bundle of His, in red, conducts electrical impulses through the heart.

Some structures harbor compound eponyms: the spincter of Oddi is a muscular valve in the small intestine, encircling the ampulla of Vater (together they control flow of bile).  Despite this ponderous double name, the two combined are about the size of a pea.  Other structures share similar appearance and function, yet the name varies by location.  The salivary glands, for example, have ducts of Wharton, ducts of Stenson, and ducts of Ravini.

The salivary ducts of Wharton, Stenson and Rivini.

The situation became even more complex as we began to study diseases.  Consider the Pancoast tumor, which is a cancer located at the top of the lung.  The classic presentation of a Pancoast tumor occurs in a patient with constriction of one pupil and a droopy eyelid, a combination of findings called Horner’s syndrome.  (The eye is affected because the tumor compresses nerves running from the spine to the head.)  Horner’s syndrome, meanwhile, must be distinguished from an Adie’s pupil (inappropriate dilation of one pupil, believed to occur from viral infection), Argyll Robertson pupils (irregular constriction of both pupils, caused by syphilis in the brain), the Marcus Gunn pupil (impaired constriction of one pupil, secondary to optic nerve damage), or a Hutchinson’s pupil (fixed dilation of one pupil, caused by a brain aneurysm).

A left-sided Horner’s syndrome. Note the constricted pupil and drooping eyelid. A Pancoast tumor is one of several possible causes.

Some eponyms sounded too benign to describe illness: Goodpasture disease (an autoimmune inflammation of the lungs and kidneys), Good syndrome (an antibody deficiency), Best disease (an inherited retinal degeneration), or Sweet syndrome (a type of painful rash combined with acute fever).  Others were playful: Pigeon-fancier’s lung (a pneumonia caused by chronic exposure to bird droppings) or Rapunzel syndrome (a bowel obstruction seen in psychiatric patients who swallow their hair).  And at least one, encountered in textbooks late at night, was laugh-out-loud comical: the “Jumping Frenchmen of Maine syndrome,” a problem of exaggerated fright reactions and nervous tics described in the 1880s in lumberjacks from the Moosehead Lake region of Maine.  Sacre bleu! Où est ma hache?! 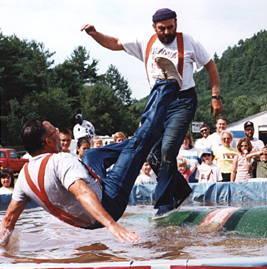 Jumping Frenchmen of Maine: are these lumberjacks dancing or are they ill?

The flood of eponyms became overwhelming.  It’s amusing to joke about a pub named “McBurney’s Point,” yet the term has no logical relation to the anatomy it attempts to describe.  The name “Goodpasture disease” does nothing to specify pathology.  As learning tools the eponyms are arbitrary and, in their abundance, counterproductive.  And so gradually, medical educators are replacing eponyms with logically descriptive terms.  “The angle of Louis,” for instance, is now properly known as “the sterno-manubrial angle,” placing it precisely at the junction between the sternum and the manubrium.  “The circle of Willis” is more accurately described as the “cerebral arterial circle.”  The “Marcus Gunn pupil” is simply an “afferent pupillary defect.”

These new terms facilitate precise communication, yet in the process the language of medicine loses some luster.  There is so much flair, even music, in some of the old eponyms—Voila! L’angle de Louis!—and there is inherent value in preserving the tapestry of medical history, passing it forward like an age-honored catechism.  The eponyms recall the giants of anatomy and pathology, scientists who laid the foundation of modern medicine.  In the end, the classics like Horner’s syndrome and Pancoast tumor will certainly persist, while the burdensome minutiae (like the three names for salivary ducts) are forgotten.

Johann Horner was a Swiss ophthalmologist. He described the findings of Horner’s syndrome in the 1860s.

I’ll add one final eponym.  During fellowship, I worked with a renowned ophthalmologist named David Walton, who specializes in pediatric glaucoma.  Dr. Walton was in his late-seventies and a true encyclopedia of medical knowledge.  Examining a patient’s eye one day in surgery, he noted a line of blood that had collected inside the eye, near eye’s drainage canal, which was scarred shut.  “Do you see that?” he asked me. “What that’s called?”  I shook my head and suggested that it was merely “a hyphema,” the generic term for a collection of blood in the eye.  Following surgery, I looked at the patient’s chart, where Dr. Walton had carefully drawn his findings, illustrating the scarred drain with its line of red blood.  The blood was labelled with an arrow, beside which Dr. Walton had written “prominent Diaz line.”  More than an excellent ophthalmologist, Dr. Walton is a man who enjoys a laugh.

One thought on “The Angle of Louis and the Jumping French-Men of Maine: Thoughts on Medical Language.”