Today is the two hundred and forty-third anniversary of the Boston Massacre, when five colonists were killed by British gunfire, on March 5th, 1770.  This past Saturday, I happened upon a Massacre re-enactment in front of the old State House, just yards from where the actual event transpired.  About fifty people participated, dressed exquisitely as British soldiers, colonial gentlemen, and a rabble of Boston wharf-rats.  Although the performance was hampered by a clumsy script and a poor PA system, the visual impact alone was powerful and believable.  I took pictures during their rehearsal around five PM:

When I returned for the performance at seven that evening, it was crowded, dark, and hard to use a camera.  I took about ten pictures but none turned out very well.  My best shot captures a sense of rowdy, crowded violence: 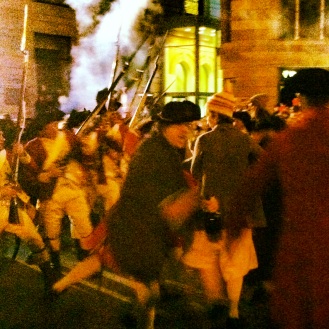 I was disappointed to have missed a better view of the melee.  At the very least—I realized in retrospect—I could have positioned myself to keep the Redcoats on the right, as they appear in Paul Revere’s famous rendering: 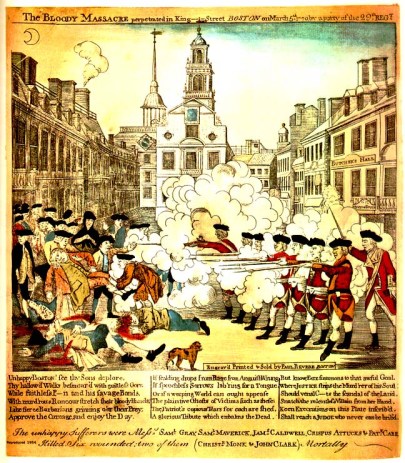 Revere’s broadside, of course, was sheer propaganda.  He shows seven Redcoats in line of battle, firing at the command of an officer, who brandishes a sword behind them.  Revere’s caption calls the colonists “guiltless” and describes the British as “fierce barbarians grinning over their prey [who] approve the carnage and enjoy the day.”  None of this was correct.

An accurate engraving would show several dozen men surrounding the soldiers, brandishing clubs, shoving, shouting, and throwing snow, ice and sticks.  Captain Preston, the British officer, would be in front of the Redcoats, where he yelled for the mob to disperse before he was knocked to the ground.  The soldiers would fire without orders, in six or seven staggered discharges, first from one who had been hit in the head and fell down.  And the entire scene would be dark and indistinct, for it occurred at nine PM in the New England winter, illuminated only by the moon and some gas lamps.  (In short, it would look like my blurry, crowded photograph.)  The print would be titled “Violent chaos in Boston.”  But Revere was an agitator, not a journalist.

There is another interesting inaccuracy, that of authorship.  In the foreground, we see the advertisement “Engraved, printed and sold by Paul Revere.”  While this was correct as far as it went, Revere omitted to say that he had merely copied the work of Henry Pelham, an artist and cartographer.  Pelham—twenty-two years old and a generation junior to Revere–was still finalizing his illustration and had left a copy at Revere’s shop.  Here is Pelham’s engraving, with Revere’s print again below it: 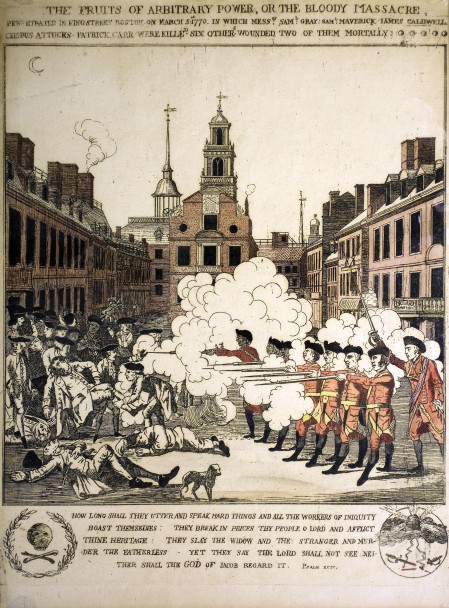 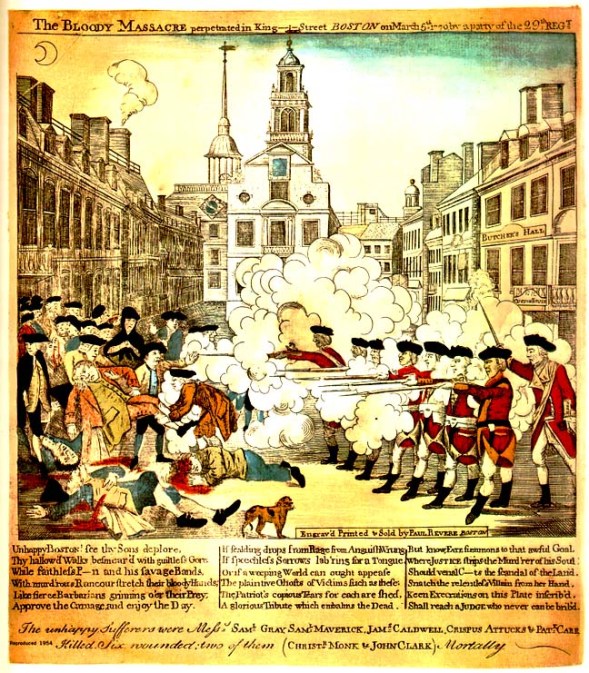 Revere changed a few details: the crescent moon points in the opposite direction, a church spire is missing from the background, and he placed a “Butcher’s Hall” sign on the building behind the soldiers.  But otherwise he made an exact copy.  Revere began selling the engraving on March 26th, three weeks after the incident.  Astounded and furious, Henry Pelham wrote him on March 29th:

When I heard you was cutting a plate of the late Murder, I thought it impossible. . . as I thought I had entrusted it [the illustration] in the hands of a person who had more regard to the dictates of Honour and Justice than to take the undue advantage you have done of the confidence and Trust I reposed in you. . . [A]fter being at the great Trouble and Expence of making a design, paying for paper, printing &c, [I] find myself in the most ungenerous Manner deprived, not only of any proposed Advantage, but even of the expence I have been at, as truly as if you had plundered me on the highway.

An interesting aside in this tale is that Pelham’s half-brother was the artist John Singleton Copley.  In 1768, two years prior to the Boston Massacre, Copley created our most enduring image of Revere: 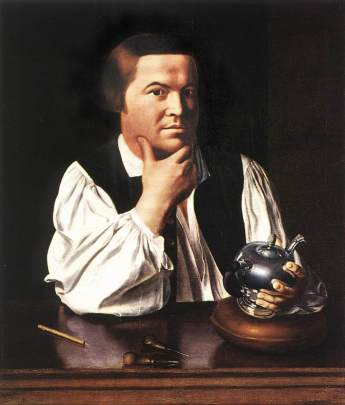 And two years before undertaking Revere’s portrait, Copley painted his brother Pelham in A Boy with a Flying Squirrel, a piece that also became famous: 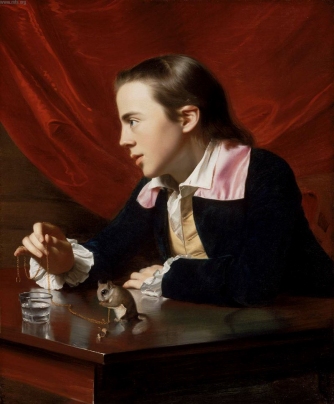 With his flushed cheeks and romantic profile, Pelham seems just the sort of impractical young man to be cheated by a sharper like Revere.  “If you are insensible of the Dishonour you have brought upon yourself by this Act,” he warned Revere, “the World will not be so.”  Alas, “the World” proved much more concerned with the gathering forces of rebellion than authorship of an engraving.

I have one final thought on this anniversary of the Boston Massacre.  In painting his brother, Copley included a squirrel, prominently in the foreground.  The squirrel perches on hind legs and tail, nibbling seeds, with drinking water nearby.  The animal wears a delicate chain, which Pelham fingers effeminately.  Copley wanted to demonstrate his skill in capturing texture and color: his brother’s soft skin, fine fabrics, the sheen of polished wood, the water, the squirrel’s dull fur.  But Copley clearly also sought to evoke an uncommon gentleness of spirit in his brother, a young man so peaceable, so kind that even a skittish woodland rodent befriends him, turns its back upon him, and enjoys a meal.

I dwell upon the squirrel because I believe the same echo of Pelham’s character is seen in his decision, four years later when sketching the Massacre, to include a small dog, again placed prominently in the foreground:

In a large scene of anger, violence, and death, the forlorn mutt occupies a strangely uncrowded middle ground.  One would expect the dog to yelp and flee from a barrage of musketry, or perhaps, for propaganda value, to snarl at the soldiers.  Instead, creating a quiet space that is neither Redcoat nor rebel, Pelham used his dog to inject an elemental melancholy without which the mayhem was incomplete.  In a scene of urban chaos, here is a guileless witness.  Pelham’s dog holds his tail between his legs and presses his ears low, slightly more sad than scared.  He turns his back to the commotion and faces us, the viewers:

In the end, Henry Pelham’s little dog gives the most honest testimony from that bloody winter night: very sad and very scary.  Beyond high talk of rights and rebellion, beyond taxes and treason, beyond politics and anger, beyond the theft of his artwork by Revere, Pelham saw deep sorrow and fear as his nation approached the dark vortex of revolution.