On the afternoon of Thursday May 9, 1908, the Massachusetts Historical Society met in Boston.  Charles Francis Adams called the meeting to order.  They discussed library acquisitions and plans to frame a portrait of Governor John Winthrop.  They selected a member to send to the Societe Historique Franco-Americaine, meeting in eleven days to discuss the life of Samuel de Champlain. 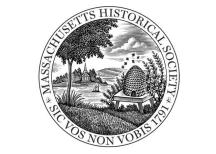 Seal of the Massachusetts Historical Society.

F. B. Sanborn would provide the afternoon’s main act, his third and concluding lecture on “The Early History of Kansas, 1854-1861.”  But before Sanborn spoke, William Thayer offered some thoughts on “the interesting coincidence of the centenary of Charles Darwin and of Abraham Lincoln. . .” 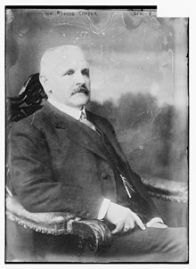 Two months earlier—February 12, 1908—had been the ninety-ninth anniversary of the birth of Charles Darwin and Abraham Lincoln.  Perhaps their shared birthday was coincidence.  Or perhaps, Thayer proposed, that somehow “Destiny itself [ordained] that the foremost Briton and the foremost American of the nineteenth century should be born on the same day of the same year. . .”  To Thayer, their shared birthday “seems to suggest that the Anglo-American world should unite in celebrating the event.”  He continued, rather boldy: “In all history there is no similar coincidence.  The twelfth of February should be made a day of festival for our race. . .”

Thayer followed his theme for four or five minutes.

The exemplar of these Anglo-Saxon principles and of Democracy itself was Abraham Lincoln.  He practiced compromise up to the point where it ceases to be a virtue.  His large tolerance had malice toward none and charity for all.  He respected law so truly that when practically dictatorial powers were assigned to him he showed how even a dictatorship might be made constitutional.  In like manner, Charles Darwin summed up the noblest intellectual characteristics of our race.  He loved truth above all things. . . He exemplified the way in which reason is to be trusted and revered. . . He defined a cosmic law to replace primitive legends.  He was afraid of nothing—not even of the Truth.

He reached his peroration:

Let the Anglo-American race, scattered over the world, keep the twelfth of February, therefore, as a festival at which these men shall be fitly commemorated.  And in celebrating them, the dominant principles and ideals of our race will stand forth for all the world to examine. . .  This cannot be done more fitly than in honoring Lincoln, the embodiment of Anglo-Saxon devotion to Justice, and Darwin, the incarnation of Anglo-Saxon devotion to Truth.

Thayer sat down.  Lindsay Swift donated a book, and Samuel Shaw presented “a printed hankerchief commemorating the death of Washington.”  Then Sanborn began his long talk on Kansas. 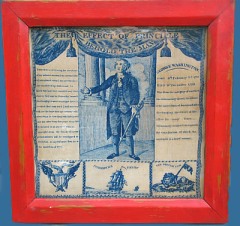 The published minutes of the historical society do not record the reaction to Thayer’s proposal.  It’s worth noting that he was an accomplished historian and author; he served on the Harvard Board of Overseers and as president of the American Historical Association.  Obviously, the idea of a Lincoln-Darwin holiday did not catch on.  And of course the modern ear rejects Thayer’s references to “the Anglo-American race,” to “the dominant principles and ideals of our race.”  (I imagine him retiring at night with a glass of scotch and some Rudyard Kipling: “Take up the White Man’s burden / Send forth the best ye breed. . .”)  Similarly, the modern reader loses Thayer’s message amid his hagiographic excesses.

Yet if we remove these troubling aspects and return to the heart of Thayer’s proposal—a holiday honoring Lincoln and Darwin—the idea is intriguing.

It would be an unusual holiday: transnational in scope, decidedly intellectual in meaning.  Lincoln and Darwin give us abundant reason for celebration and inspiration.  Of course both men were ingenious.  They were largely self-schooled, Lincoln memorizing Shakespeare and the Bible on the American prairie, and Darwin collecting specimens throughout South America, then returning to cogitate for decades at his English estate.  Both were virtuous men, known for honesty, and fidelity to family and friends.  Both were physically brave.  We know this from Darwin’s travels on the HMS Beagle and Lincoln’s appearances at the battlefront.  They were intellectually courageous, unbending against furious opposition.  Both were truly human, suffering set-backs, malaise, depression, and the death of their children.

And in the end, of course, Darwin and Lincoln each forged a revolution.  In removing man from the firmament of angels, Darwin completed the revolution in thought that had started with Copernicus.  In defeating the Confederate rebellion, Lincoln transformed a bleeding, dying nation into a new Union of liberty.  Their accomplishments became underpinnings of all that followed.  We could do much worse than to celebrate the lives, accomplishments, and examples of Abraham Lincoln and Charles Darwin.

I second Mr. Thayer’s motion from May of 1908!  Please join me!  Mark your calendars—February 12th, Lincoln-Darwin Day—and plan “a day of festival. . . at which these men shall be fitly commemorated.”  Fortunately, knowing Old Abe and Mr. Darwin as we do, a fit commemoration can be as simple as telling bawdy jokes and watching finches at the bird-feeder.

(Author’s note: Original written February 2013; to be republished annually until the holiday catches on.  Source: Proceedings of the Massachusetts Historical Society, published by the Society, 1908, pp. 450-60.)